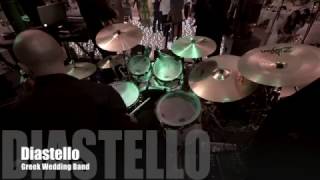 Another great year of weddings 2017

The Ultimate Checklist for a Greek Wedding in the UK!

Tips for Booking Entertainment for your Wedding.

The story of the "Stolisma"

Many of the Greek Cypriot wedding traditions have been in existence for centuries. I am attempting to put in writing how these were and still practiced, with their significance to culture and superstition. Though there are many paradoxes to the Greek Orthodox faith; this is not an article on the religious church ceremony, merely a descriptive text on the customs and traditions.

However, many of the practices stem for the Greek Orthodox Christian religion and have evolved into fusion of religion with superstitious beliefs full of rituals and symbolism. These cultural practices; like folklore; have been passed down from generation to generation. In the Modern Greek Cypriot wedding of today, many of these cultural traditions are still celebrated but have been diluted and scaled down as the result of modern living. As a culture Greek Cypriots and Cypriot immigrants have become more universally diverse, with the influences of globalisation.

Just as in folklore, I have based this article on several interviews with first generation Greek Cypriot migrants to the UK from the 1950s and early 60s.

According to folklore, the Greek Cypriot weddings of the late 18th Century would last for three whole days. These three days would be a mix of family and communal celebrations consisting of music, dance, food and ceremonies full of superstitious rituals. The ceremonies played an integral part in preparing a young couple for marriage.

In the late 18th Century many marriages were arranged amongst the parents or close relatives. Society consisted of small communities commonly in rural villages, where whole families would know one and other; including their family ancestry to avoid any re-marrying into the same bloodline.

The ceremony on the first day was known as the “Paploma”. Translating as “mattress”. Family and friends would prepare the matrimonial mattress with a ceremony representing the unity of the couple. Every corner of the mattress was decorated with a red ribbon in the form of a cross to symbolise the bride’s virginity and fertility. The close family and friends present, would dance with the mattress holding it above their heads to live music performed by a violinist “Violari” and Cypriot lute player “Laoutari”. The musicians would perform instrumental music and also the popular “Stolisma” tune, singing a variation of lyrics to bless the mattress. Other lyrics were also sung to recognise the social standing of the parents and other relatives within the family. A baby from the family would often be rolled across the mattress to further symbolise fertility and for them to conceive children as a married couple. Relatives would also tip the musicians as a token of appreciation, and to offer their wishes of future prosperity for the soon to be married couple. In the evening of the first day, it was also common for the bride’s parents to host a banquet “Trabezi” at their home for family, friends and the future in-laws.

On the day of the wedding a second ceremony takes place. This is known as the “Stolisma”, translating as the “Decoration” or “Dressing”. Both the bride and groom are blessed and prepared, dressed for church by the family, best man “Koumbaro” and maid of honour “Koumera”. Both the bride and groom would have an individual Stolisma ceremony at their family homes and will not attend each other’s. This particular ceremony contains the most ritual and symbolism as it happens just before they both go to church for the main religious union. This cannot take place without the “Violari” and "Laoutari" as there are rituals centred on the music and the lyrics of the “Stolisma” song. The ceremony symbolises the parting and blessing of the child; now an adult, and is moving on to be joined in matrimony to their chosen partners. At both of the ceremonies, there are many rituals that remain the same, but some that are different.

As the music plays and the lyrics are sung with instruction, the groom is given a close shave; traditionally by the village barber. In most of today’s ceremonies, the best man does it. The tune performed by the violari and laoutari is mostly the same throughout, with alternating and poetic lyrics of mainly religious text. This is the main difference between the groom and the bride’s ceremony. However, bits of clothing are not placed on the bride and groom until parts of the ceremony have taken place.

At both houses the repetitive tune will stop half way through and the music will change with a piece of instrumental music with a 7/8 time signature similar to a “Kalamatiano” dance. Parts of the clothing are placed in a basket “Paneri” where either the groomsmen “Koumbari” or Bridesmaids “Koumeres” will dance to the music being performed holding the basket of clothing. This symbolises luck and fortune for the future bride or groom. This is passed on from groomsmen to groomsmen or bridesmaid to bridesmaid. Once this part of the ceremony has come to an end then the main tune performed at the beginning of the Stolisma is repeated with new lyrics for the most important part of the ceremony.

The bride or groom, are now dressed and prepared for church. Before they go a last sending off from the parents and relatives takes place. The parents and immediate family are called individually within the lyrics of the Stolisma song, to bless them with the tying of a red sash around the waist, known as the “Zoni”. Each person will act out the symbol of the cross with the red sash three times; from the forehead to the waist, right shoulder to left shoulder. The sash is also then wrapped and tied around the waist a further three times. Everything is done three times, as it is symbolic of the Holy Trinity. The colour red is also a symbol of fertility. As in the Greek Orthodox faith many practices are symbolic and repeated three times to represent the Father, Son and Holy Spirit. Once all the immediate family have participated in this ritual, incense and dried olive leaves are burnt in a small highly decorative silver vessel, “kabnistiri”. The immediate family repeats the same process individually acting out the symbol of the cross three times with the kabnistiri over the groom; again once called within the song. The incense is a blessing and symbolic for God to protect them and rid any negative spirits. The ceremony at times can become very emotional for some families, especially if some family members are no longer with them. It was also common for rose water to be poured onto the hands of guests to wash and purify the blessing. Once the ceremony had come to an end, the bride and groom would individually make their way to church. It was common in rural villages for the violari and laoutari to serenade them on their journey.

After the church service another light-hearted custom would take place. An odd number of sugared almonds would be placed in a silver bowl with tiny red ribbons. These were offered to young non-married guests, both male and female. The custom was that they would eat the sugared almond and place the red ribbon under their pillow that night. Folklore suggests that their future spouse would appear in their dreams. The wedding reception would then be held in the outdoors of the village with food and drink. This can be thought of on the lines of a street party. Other customs would also take place at the reception such as the entrance of the bride and groom and the money pinning dance etc.

The day after the main wedding was the day known as the “Antigamo”. Both sets of parents would prepare another banquet for close family and friends. The food mainly consisted of barbequed meats “Souvles” and vegetable produce from their land.

There are other traditions and customs that take place over the three days, which are more common and still, occur in the present day. The ones described above are the ones slowly dying out due to cultural development and evolution.